The Trees in Camden Park 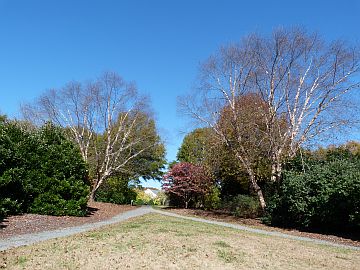 31 Oct The Trees in Camden Park

Posted at 12:02h in Life in Fearrington by Sarah 0 Comments
0 Likes This tour is a continuation of the tour of Trees in the Village Center.

Move ahead along the bed on your right. Here an exception is made. The tree-like shrubs with the lustrous dark green leaves are evergreen viburnums  (Viburnum awabuki “Chindo”).  This cultivar of the species was collected in Japan by the late J. C. Raulston for the North Carolina State University Arboretum. It is used extensively in landscaping. A little further ahead in the bed on the right is an oak tree of the Red Oak group – probably a Pin Oak (Quercus  palustrus). There are some 600 species of oak containing both deciduous and evergreen types. In general it is noted for the great strength and hardness of the wood. It has many practical uses, and is the national tree of many countries including the US, England, France and Germany. Several species will be seen further along the trail.

To the right of the tupelo is a cherry tree (Prunus sp.). It is noteworthy because of its history. It was planted as a flowering weeping cherry – the weeping part grafted onto a more vigorous rootstock with an erect-type growth habit. But the rootstock had buds and its shoots had to be pruned regularly to prevent them from overwhelming the less vigorous branches of the weeping graft. Now you see a few remnant lower weeping branches, but more erect growth habit of branches of the root stock has dominated.

The next tree on the right is a Red Bud (Cercis canadensis). This native is noted by its showy pinkish flowers that herald spring. Floral buds frequently emerge directly from limbs and the trunk. Native Americans ate the flowers, raw or boiled, and in parts of Southern Appalachia green leaves were used to season wild game. A little further ahead and set back a bit is an American or Kentucky Yellowwood (Cladrastis kentukea). The fragrant white flowers hang like those of the wisteria. The yellow wood is used to make specialized furniture and gunstocks. It is one of the rarest trees in Eastern North America.

At the end of the bed and just around the corner on the right is a buckeye tree (Aesculus glabra). It is the state tree of Ohio. Native Americans used tannic acid from the nuts for leather working. And the nuts were roasted, peeled and made into an edible meal. Ahead and on the left in the meadow, as well as in the beds on the left and right, are Red Maples (Acer rubrum). The serrated leaf margins distinguish them from Sugar Maples (Acer saccharum) which have  smooth margins. The name “red maple” stems from the impressive red color of  the leaves in the fall season. There are some 128 species of maple most of which are native to Asia. Just think of the number and kinds of Japanese Maples. The maple leaf is the coat-of-arms  of Canada. The word “Acer” is from Latin meaning “sharp” with reference to the pointed lobes of the leaves. Small flowers appear in late winter to early spring. The distinctive seed are sometimes referred to as “whirly birds” describing their spiraling descent when detached.

Somewhat hidden in the long bed to the right is a large Deodar Cedar (Cedrus deodara). Also known as the Himalayan cedar, this evergreen conifer is a native of the Western Himalayas. There, because of its rot resistance, it was found to be ideal for building the well-known houseboats on Dal and Nagin lakes in the Kashmir Valley. In Srinagar, the largest city in the valley, the main intricately carved mosque is built entirely of deodar. It is also the national tree of Pakistan. There is a large spreading Southern Live Oak (Quercus virginiana) in the bed on the right. This evergreen species is native to Southeastern US, and is iconic of the Old South. The willow-shaped leaves are stiff and leathery and the acorns are small. The wood is heavy and difficult to work with. It was very valuable back in the days of wooden ships.

Next in the bed is a Willow Oak (Quercus phellos). This deciduous species is used largely as an ornamental tree. Witness the number lining streets in the Village, notably East and West Camden and Madison.

In  the bed on the left near the pond is a Southern Magnolia (Magnolia grandiflora). The species name refers to the large white flowers that stand out with the lustrous dark green heavy leaves as a background. It is a native of the Southeastern United States and is associated with the Old South. The state tree of Mississippi, the flower was used as an emblem of the Confederate Army during the Civil War. It is used extensively in landscaping. To the right of the magnolia and further ahead in the bed and next to the water are  cone-shaped Bald Cypress (Taxodium distichum). This deciduous conifer typically grows in saturated soil. Later on when you cross the dam of the lower pond you will see “cypress knees” that are woody projections of roots. Their purpose is uncertain. Perhaps they serve as supports to the tree. This conifer is called “Bald” because it loses its foliage in the winter.

Move along to the fork in the path. The slender tree in the triangular bed (a volunteer)  is probably an elm (Ulmus sp.).

Turn to the left and then to the right toward the lower pond. Again the path forks with a small bed at the junction. The small deciduous tree is a Japanese Crabapple (Malus floribunda). The colorful fruit persists through winter.

Continue on the path through the meadow and past beds on either side down to the arrow-shaped bed on the right next to West Camden. Near its tip and around to the right are two White Mulberry trees (Morus alba). Native to North China, they are widely cultivated to feed silkworms. Stamens act as catapults releasing pollen half the speed of sound. Don’t get in the way! A little further on and to the left in the meadow are four trees near the pond. The first, a Live Oak,  followed by a Loblolly Pine (Pinus taeda). This pine is an important timber tree and is the second most common species in the United States, (the first is Red Maple). It has a rapid growth rate and is grown in plantations.

After the Loblolly is a Sweet Gum (Liquidambar styraciflua). It is popular as an ornamental tree, and the reddish-brown wood is important in plywood manufacture. Leaves turn purple in the fall. It is easily identified by the star-shaped leaves and the hard, spiked fruit. The fourth, apart from the others, is a Red Maple.

Now cross the dam. Attention is called to one tree and  the “knees” of another. The tree is a Sycamore (Platanus  occidentalis). It is distinguished by the exfoliating bark, leaving exposed  a smooth whitish-gray surface. The wood is used for interior finish in houses and to make butcher blocks.  Yancey and McDowell squares are lined with Sycamore. Toward the end of the dam, there are several Bald Cypress. Note their “knees” protruding near the water.

On leaving the dam. you may want to see if there are any new Belted (Tennessee Fainting) Goats. There usually are. The story is that sheepherders kept a few of these goats with their flock for protection against predation by wolves. When a wolf would threaten, the goats would faint making them easy prey while the sheep escaped.

Straight ahead is a small grove of mature White Oaks (Quercus alba). Bear to the left on the path leading up to the bridge across the stream linking the ponds. Appreciate the open meadow on either side.

To the left and at the end of the bed lining the lower part of the stream there are a couple of small Gingkos (Ginkgo occidentalis) It is the only extant species of this “fossil” tree. It first appeared during the Permian geologic period, some 250 million years ago. It is found wild only in China. The unique leaves are fan-shaped with veins radiating into the leaf blade. It is a popular ornamental tree. As an aside, six ginkgos about a kilometer from the Hiroshima atomic bomb blast survived and are still alive. At the bridge keep right where ahead you see the large, well-formed Red Cedar (Juniperus virginiana)  on the right. This slow-growing native evergreen conifer is known as a pioneer invader. It is among the first trees to establish on cleared, eroded, damaged land. The aromatic wood is used for making storage chests and lining clothes closets. It is also rot-resistant and used for fence posts. The cones are used to flavor gin. Then, straight ahead, our favorite White Oak. It must be 150-200 years old. Stop to admire it; it is impressive any season of the year. Then take time to sit a spell on the bench underneath. Look up at the massive contorted branches. The small flock of “sheep” will still be grazing off to the right.

On the right shortly before reaching the park exit is a small squat Hawthorne.

This concludes the tour, but I would like to mention a couple of interesting trees in the park that were not seen. The first is the Japanese Flowering Apricot  (Prunus mume), a species of Asian plum native to China. Its pinkish flowers appear in winter before the leaves. The small fruits are processed for food in Southern Asia.

The next and last tree covered  is the Empress or Princess Tree (Paulownia tomentosa). It is the only one in the Park and perhaps in the Village. As you leave the Park it is near the top of the last bed to the right – near East Camden. It was named in honor of the Grand Duchess Anna Pavlovna of Russia. The large heart-shaped leaves resemble those of the local Catalpa (Catalpa bignonioides). The flowers resemble those of the foxglove and appear before the leaves. The numerous fruit are egg-shaped.

Much of the information in this guide came from the earlier-referenced mapping and from Wikipedia.