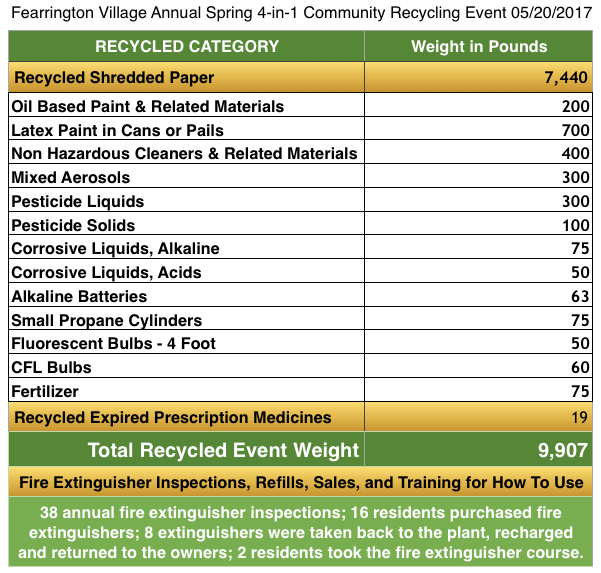 Posted at 09:38h in Notices by Jon Darling 0 Comments
0 Likes Many thanks to many residents and volunteers who participated in the 2017 Annual Spring 4-in-1 Community Recycling Event, which was held in the parking lot of The Gathering Place between 9:00am and Noon on Saturday, May 20, 2017.

As you can see from the weights and measures table on the right, thanks to the work and participation of so many residents, this was an extraordinarily successful annual spring recycling event in which 9,907 pounds (5 tons) of material was recycled.

This year, 342 vehicles participated in this event, and 5 tons of recycled weight in just 3 hours is a LOT.

This amount included 3.72 tons of shredded paper, which according to the U.S. Environmental Protection Agency had the additional estimated associated (embedded) effects of saving:

Coordinated by Lindsay Strobl (FHA) and Jason Welsch (The GREEN SCENE). We express special appreciation to Debbie DiSabatino, who originated the “Community 4-in-1 Recycling Community Event” concept in 2011 and who served coffee and donuts again this year; FHA and the Fearrington Green Scene, who partnered to organize this year’s event; the many residents who brought their recyclables to the event; and to the following volunteers who planned and/or worked the event: Judith Andersson, Jon Darling, Bob Devido. Debbie DiSabatino, Barbara Harris, Elizabeth Krull, Steve Krull, Matthew Leavitt, Danielle Levine, Jerry Redden, Gene Rogers, Lindsay Strobl (our Talis Management FHA Site Manager, who came in on her day off), Betty Simon-Thomas (great healthy homemade cookies), Maarten Simon-Thomas, Maggie Tunstall, and Jason Welsch. We also appreciate the support of the Chatham County Sheriff’s Department in collecting the recycled expired medicines for proper disposal.